Showing posts from November, 2015
Show all

Some more maps of language diversity 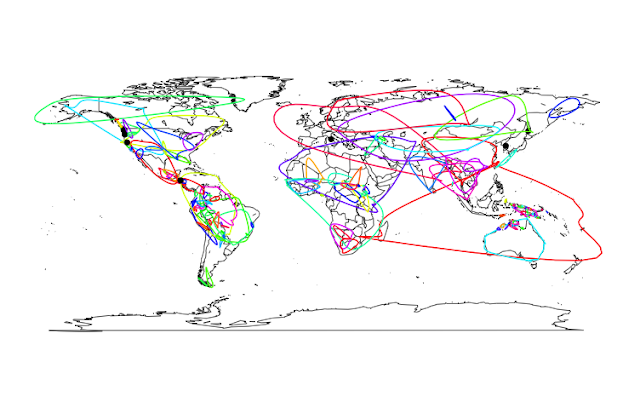 I made some maps of language diversity, to add to Hedvig's long lists of existing info graphics here and here , using data from Glottolog.  I wanted to make a map showing the number of language families - 272 according to Glottolog, not counting sign languages, artificial languages, creoles, pidgins, and mixed languages.  Each curve shows the area in which languages in these families are found.  The colors were randomly selected in order to try making the curves distinct from each other, although in some areas these are difficult to make out, such as in southeast Asia.   Try spotting in particular Indo-European, Turkic, Afro-Asiatic, Na-Dene, Quechua and Niger-Congo. Austronesian is the red triangle in the right hand corner, although my curve-plotting algorithm makes it incorrectly cover Australia as well.   The maps are generated in R using the 'maps' package.  Here's a function 'drawcurve' in R for drawing curves of a particular colour around a set of
Post a Comment
Read more 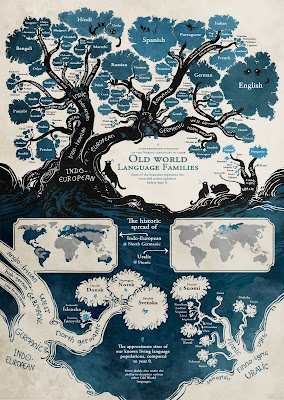 Hello everyone, In this post, we will tackle the following questions: What is a language family? How many language families are there in the world? What is an isolate? How many isolates are there? How many sign languages might there be in the world? How many contact languages might there be in the world? What is the difference when it comes to these categories with respect to Glottolog and Ethnologue? Does it matter? Hopefully this might be useful to people interested in language history and/or users of Glottolog and Ethnologue. As usual, I will use headings so feel free to skim and skip things that are not interesting to you and only read what you find relevant. It's been few posts lately by me (Hedvig), will try and change that. Right now I'm out travelling in Europe, going to workshops and visiting friends and getting a lot of inspiration. Already been at two workshops:  Capturing Phylogenetic Algorithms for Linguistics  in Leiden and before
Post a Comment
Read more
More posts