Showing posts from February, 2018
Show all

A visit to the Royal Museum for Central Africa 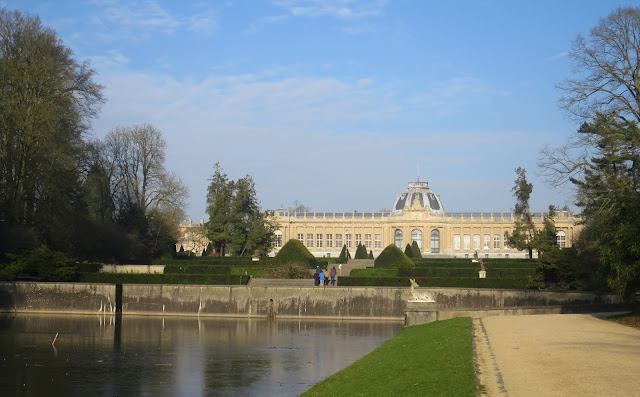 Two weeks ago I went to visit the Royal Museum for Central Africa in Tervuren, Belgium. The reason was straightforward: in the ongoing endeavour to study Bantu gender systems, there are at least 10 north-west Bantu languages on which the only information easily available is located there. Since that is not an insignificant number as the total sample is about 250 languages, of which 50 or so with no information available anywhere, it seemed worthwhile to go there and collect as much data as possible. The museum itself has been closed since 2013 and, bad timing on my part, is supposed to re-open late this year. The main building is spectacular, surrounded by a beautiful park, and the immense collections make the RMCA one of the worlds' centers for the study of Central Africa. Once the museum opens again, there will be a permanent exhibition on the languages and linguistics of Central Africa, so if you have a chance to go there you should totally do that. Unfortunately, I did
Post a Comment
Read more

I was looking back fondly over my past rejected job applications, when I came across a cover letter that I wrote to Grammarly in 2017, a grammar-checking app that came to prominence due to their aggressive YouTube advertising campaigns.   They were advertising for a job for linguists, aimed in particular at people working on natural language processing.   I used Grammarly for a few days, and had some fun  devising tortuous variants of ungrammatical sentences to test what it could do.  It does many things well, but it also makes bizarre mistakes that reveal that the app is not attempting to parse the sentences, or was doing so very superficially, and on which it is out-performed by existing parsers such as the Google Natural Language API or the Stanford Parser .  I wrote these points up in a cover letter and sent it to them, which got me invited to an uninformative Skype interview and a polite rejection some time later.  What follows is a brief summary of these points. Grammarly c
Post a Comment
Read more

Thoughts and results from the generative side of linguistics

Hello everyone, This posts serves to show non-generativist readers of this blog things going on in the generative sphere that they might like to know about. Mainly: grand challenges, the future of the field comparisons between genetic research into human history and historical linguistics large cross-linguistic databases Sometime ago, we wrote about the conference that was held in Athens in 2015 titled: Generative Syntax in the Twenty-First Century: The Road Ahead It was a conference that gathered many people and were very important matters were discussed, matters that are relevant both to those who describe themselves as "generativists" and those of us who don't. They had a round-table discussion, and the discussants also submitted written statements prior to the event. These can still be accessed and read, and provide insights into what people consider as crucial issues. Some of the links to these files had since broken, I contacted one of the o
Post a Comment
Read more
More posts