Showing posts from September, 2016
Show all

The Glamour of Grammar 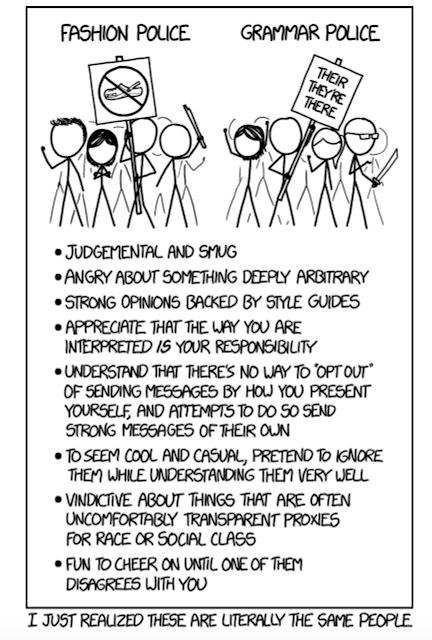 A quotation from Lyle Campbell's Historical Linguistics  (1998:5) on the shared etymology of the words glamour  and grammar , in honour of today's xkcd  cartoon: ' Glamour  is a changed form of the word  grammar , originally in use in Scots English; it meant 'magic, enchantment, spell', found especially in the phrase 'to cast the glamour over one'.  It did not acquire the sense of 'a magical or fictitious beauty or alluring charm' until the mid-1800s.   Grammar  has its own interesting history...In Classical Latin,  grammatica  meant the study of literature broadly.  In the Middle Ages, it came to mean chiefly the study or knowledge of Latin and hence came also to be synonymous with learning in general, the knowledge peculiar to the learned class.  Since this was popularly believed to include also magic and astrology, French  grammaire  came to be used sometimes for the name of these occult 'sciences'.'
2 comments
Read more

Sound-meaning associations across more than 4000 languages 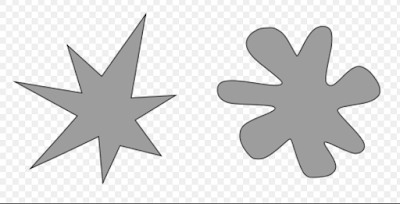 My friend Damián ‘blasé Damián’ Blasi published a paper in Proceedings of the National Academy of Sciences this week, with Søren Wichmann, Harald Hammarström, Peter Stadler and Morten Christiansen, available  here . The paper was on how there are common sounds that languages across the world tend to use in particular words.  An example is the word ‘nose’, which tends to contain the nasal consonant  'n' more than expected by chance.   The word for 'horn' often has a 'k', reminiscent of the 'bouba/kiki' effect, where people who are asked to use the labels 'bouba' and 'kiki' to describe the two shapes below will tend to use 'kiki' for the jagged shape on the left. The word for 'small' often has an 'i', as if the lips are being placed together to indicate size in the same way that finger tips can: The word for 'breast' often has a 'm', the reason for which I will not attempt
3 comments
Read more 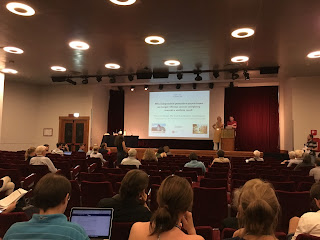 The last two days I attended the workshop "Diachronic and functional explanations of typological universals" at the 49th Annual Meeting of the Societas Linguistica Europaea in Napels, Italy. This theme session was organized by Natalia Levshina, Ilja Serzant, Susanne Michaelis and Karsten Schmidtke-Bode, the description can be found here (page 409-410) and the introduction can be found here . The purpose of the workshop was to draw attention to the importance of diachronic explanations for typological universals. Typological universals were also the topic of Jeremy's last post . They are properties found in (nearly) all languages, or if not all, enough languages to deserve an explanation. Jeremy discusses word order universals, an example being that if a language has verb-object word order, it is also likely to have prepositions, i.e. to have adposition-noun order (see Matthew Dryer's map in the World Atlas of Language Structures Online ). Many explanations prop
Post a Comment
Read more
More posts