Showing posts from January, 2016
Show all

How will we talk in the future? Repost 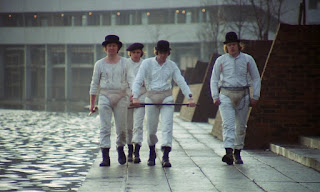 During the National Youth Science Forum here in Canberra I was asked a couple of times about "the language of the future", usually connected to questions about language death/endangerment, globalisation and what lots of non-native speakers and language contact will "do" to English. Actually, we've discussed these issues before - but in video format - go have a look . I believe I need to revisit those points again, there are things I'd like to add and modify, but until such a time, enjoy them videos! And as usual, the feedback box is here . If you, like me, are a fan of dystopian sci-fi that deals with human nature and future as s species and global society, and features as a language as a way of illustration these themes, I doubt I will need to recommend these two: A Clockwork Orange (1971) Blade Runner (1982) But! Have you also checked out these two? Firefly (2002-2003)  The Expanse (2015- ongoing) To read more about Be
Post a Comment
Read more

Ways to stay updated with research news in linguistics

By Hedvig Skirgård - January 13, 2016
We've talked about this before, but I think it needs to be said again - get on mailing lists for linguistics if you want to be kept in the loop about things. Announcements of workshops, positions, conferences, edited volumes etc - they main information distribution channel for such news in linguistics is mailing lists. There are some other useful RSS-feeds and twitter personas that are good to keep track of as well, but do get on mailing lists first if you're keen to stay updated. You don't have to stay updated you know, but I know that many readers of this blog are young researchers looking to start a career and for them this is useful. Lingust List lists a lot of useful mailing lists(!), go pick things out there. If you're curious what's actually going on in the lists, go check the archives. Linguist List doesn't archive all lists they list, but a majority. archived mailing lists non-archived mailing lists There's the overall lists   LINGUIST
Post a Comment
Read more

Linguistics at Down Under National Youth Science Forum 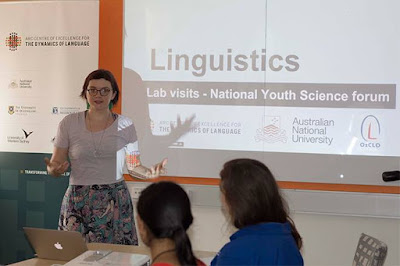 Representing linguistics at science forum, some links and photos. Material to inspire those interesting in linguistics and perhaps also useful things to other linguists thinking of doing the same thing. Colleagues and I at the Centre (of Excellence) for Language Dynamics , and from linguistics at t he College of Asia-Pacific and College of Arts and Social Sciences at Australian National University have recently been involved in representing linguistics at the Down Under National Youth Science Forum. It's organised by Rotary Down Under (Australia, Solomons, Papua New Guinea, Tonga, Samoa, New Caledonia, Fiji, Vanuatu, Nauru, Norfolk, American Samoa and New Zealand)  and is taking place here in Canberra where I live. Lots of high school students attended, mainly from Australia and New Zealand, and they were very enthusiastic, to say the least :)! We got lots of clever questions and reflections, we were much impressed with the students. This was the first time linguistics was co
Post a Comment
Read more 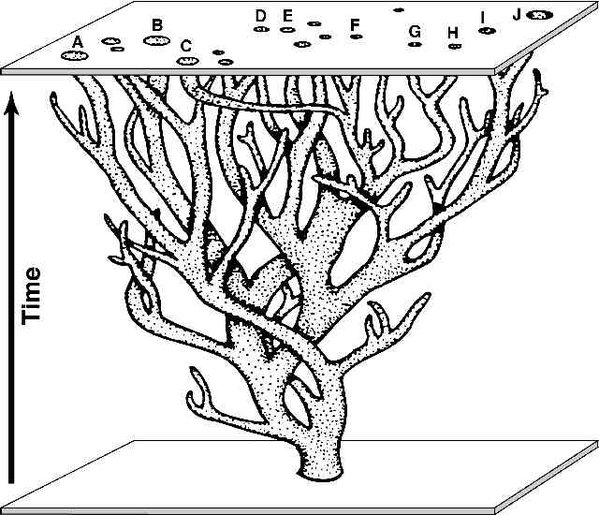 This image illustrates the situation that any researchers trying to understand and reconstruct the past of a current situation with related  tokens  faces - be it in biology, linguistics or another field. Only a sliver, a slice of time is available to us and from that we try to go back and reconstruct relationships. What's nice about this picture is the branches reaching across (C), thus appearing close to others (B) in that slice of time, but actually it's genealogically related to another further away token (F). It does not really illustrate horizontal influence, i.e languages (in our case) becoming similar due to contact - unless you consider the closeness across the x & z-axis' , like with C & B. Also, notice the branches that don't make it all the way up, the extinct species/languages/etc. I saw this image for the first time in a presentation by Fiona Jordan and liked it a lot. It's originally from Strickberger (1990), who adapted the
Post a Comment
Read more

A list of free online tutorials and manuals - Praat, ELAN, R, and FLEx

***POST-EDIT*** This post has been made into a "page" available at the top menu. Updates will be made there for your convenience. As per a request for a list of free online introductory tutorials and manuals for several linguistic oriented software programs, I here by present, from the frozen depths of Saskatoon, Saskatchewan, Canada, a list of free introductory tutorials and manuals for Praat, ELAN, R, and a bit on FLEx. I haven’t read them all, but I’ve found some to be very useful over the years. I’ve also shamelessly plugged a few of my own. Please feel free to add to/ remove and/ or modify the listings! Praat Homepage Using Praat for linguistic research – good tutorial by Will Styler Praat short tutorial by: Pascal van Lieshout Yes, that's a mouth and an ear The official massive Praat manual Links to other manuals Tutorial for self study: Basics of phonetics and how to use Praat Hands-on tutorial: Using Praat for analysing a speech corp
1 comment
Location: Saskatoon, SK, Canada
Read more 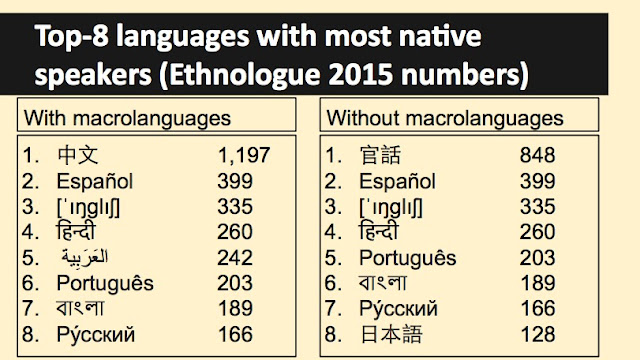 I'm making slides for a introductory linguistics presentation for secondary school students, thought you guys might like these three. This first one is a bit complicated. In the square to the left you see the ranking of languages and macrolanguages by native speakers, according to Ethnologue 2015. To the right you see what happens if we ignore macrolanguages entirely.  The numbers are in millions of speakers. They're from here .  (Since English is so prevalent, the name of that language is in IPA to be more fun.) It's really easy to get your hands on these kinds of numbers, and for more well-known languages Ethnologue stats are more reliable than for lesser known. Yes, I do complain about Ethnologue but for purposes like this I think it's alright to use their data. "Macrolanguage" is a term to help different language code standards map to each other. For example in one of the standards "Chinese" is counted as 1 language whereas in
Post a Comment
Read more

Feeling bummed about the Ethnologue pay-wall? Cheer yourself up with these freely accessible resources

Lists, lists, lists & posts  - we've  got lists and posts to make you happy!! The Ethnologue might be instituting restrictions, but many other parts of linguistics - especially documentation and descriptive, is getting more and more open! list of open access venues in linguistics post explaining open access and varieties of it list of cross-linguistic databases  by Bodo Winter list of helpful blog posts on freely accessibly cross-linguistic databases posts tagged "free PDF", because - you guessed it - they contain links to interesting publicly available research  posts tagged "Open Access", because obvious a post on the newly started Open Access publishing house, Endangered Languages Publishing Also; why not indulge yourself in some of the other resources SIL has produced and that are accessible freely? Such as: Online Dictionaries of the World - Webonary ,  Linguistics Glossaries ( English only  &  French/English ),  All of thei
Post a Comment
Read more

By Hedvig Skirgård - January 01, 2016
As many of our readers know, the great catalogue of the worlds languages Ethnologue has instituted a paywall. In the wake of this, there's been a lot of discussion at various venues about what this means, about SIL International and languages codes in general. I've been following and participating in these discussions, and I thought I'd share some points that might clarify things a bit and improve discussions and general understanding of these issues. Please have a read through these points and the statements Ethnologue and SIL International has done themselves if you want to get into the discussions. Jump the basics if you know them. First some basics Ethnologue is a product from SIL International. It started in 1951 and is now on its 18th edition. A new edition will from now on be coming out every year in North American Spring , i.e. relatively soon. Ethnologue features information on languages, in particular population stats, alternative names, genealogies and enda
6 comments
Read more
More posts