Showing posts from February, 2016
Show all

Climate does not affect the way you speak 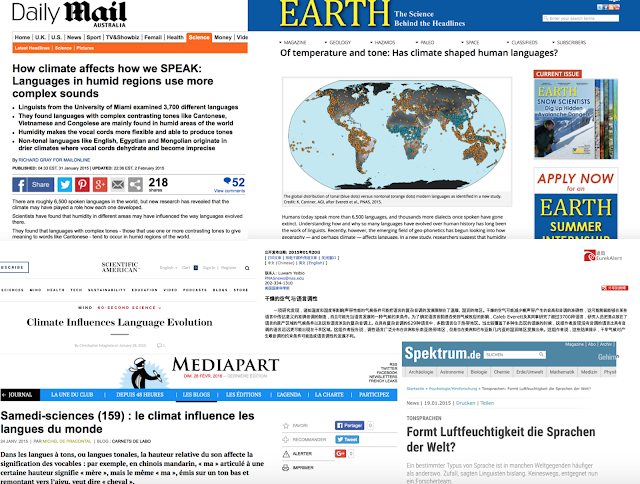 I was sipping a coffee in a café in Xishuangbanna, southwest China last January when I saw the following news item doing the rounds on the internet: This was a  paper  by Caleb Everett and two of my colleagues/arch-nemeses, Damián Blasi and Seán Roberts.  Their claim in the paper is that climate can affect languages, in particular that tonal languages are easier to speak in humid climates.   Tonal languages such as Chinese use pitch to make distinctions between words, for example xióngmāo means ‘panda’ (熊猫) while xiōngmáo means ‘chest hair’ (胸毛).   Tonal languages tend to be found in warm and humid places around the equator such as Asia, Africa and Mexico.   I had heard other people joke about this peculiar geographical pattern before, so I found it both amusing and surprising that someone had proposed the following half-way plausible explanation. When breathing in dry air, the larynx can become desiccated and people have less precise control over phonation.  Tonal la
2 comments
Read more 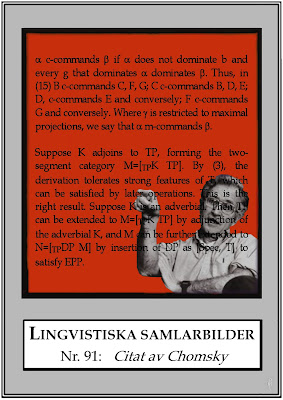 Hola, it's memes time! Not any memes, memes that are particularly entertaining and interesting to linguists and that are created by linguists. If you like 'em, spread 'em! There's two sources of memes for linguists that I'd like to tell you about: Parkvall's Lingvistiska Samlarbilder ( Book of Faces and Tumblr)    Kittens and Linguistic Diversity ( Book of Faces ) Parkvalls samlarbilder The idea behind Parkvalls Samlarbilder is quite simple, "samlarbilder" means "collectors/trading cards" in Swedish and the cards feature something that is of significant value to linguists. Below are two more examples, the Berlin & Kay results for a few languages and the cover of the first edition of Saussure's famous work (as compiled by his students) which is foundational to much modern linguistics. The above to cards features quotes by Mr Chomsky and Mr Chimpsky, two rather talented primates :). If you want to know more about the inter
Post a Comment
Read more

What does a linguist do...? re: Annemarie 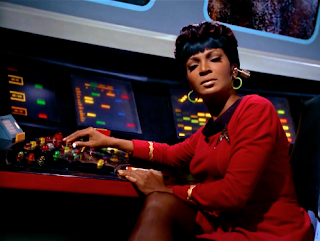 I recently watched the two Amazing Spiderman films, and thought a little bit about the depiction of scientists in the media. Many movies (and tv series, books, and comics...) seem to put science and/or scientists in a bad light. Take Spiderman: accidentally being bitten by a spider in a lab gives you Spidey powers. Spidey turns out to be a good guy and uses his powers as a superhero, but still there is a sense that simply working in a lab can expose you to things that could utterly transform you. Simply having access to the weird things that are developed in labs can do the same, as is the case for Spiderman's nemesis the Green Goblin. I could write an entire blog post contemplating why this depiction of science, if it does indeed influence people's view of science, is very detrimental to society. But anyway maybe things aren't so bad, as Matthew Nisbet writes that both the depiction and the image of scientists held by the public has become far more positive in the last two
Post a Comment
Read more
More posts