Showing posts from October, 2017
Show all

A week of Bantu grammar reading: The good, the bad, and the ugly 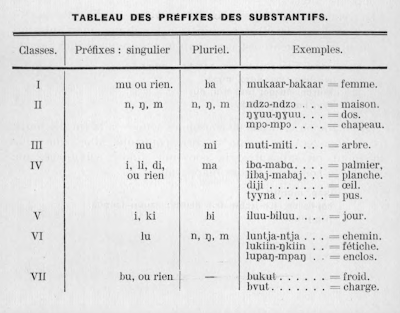 In my week of grammar reading, there were some truly good, truly bad, and truly ugly aspects. It was entirely devoted to Bantu , as it has been for some time, because of a project on Bantu gender systems I am doing together with Francesca Di Garbo of Stockholm University. Bantu languages are best known for their complex morphology, both involving the noun ( gender ) and the verb (Tense-Mood-Aspect). The noun typically is classified in up to around 12 different genders, signified by prefixes that attach to the noun root, and prefixes that mark agreement with the noun throughout the clause. To start with the good, below is an overview of nominal prefixes in Ding (diz), spoken in the Democratic Republic of Congo. The Roman numerals in the first column signify each gender, the two subsequent columns relate the singular and plural prefixes used for nouns, including different forms, and the final column gives examples of the type of noun found in each gender.  Mertens (1
Post a Comment
Read more
More posts