By Hedvig Skirgård - September 15, 2014
There's a new kind of tool that lets you explore the data from the World Atlas of Language Structures (massive typological database): WALS Sunburst Explorer! 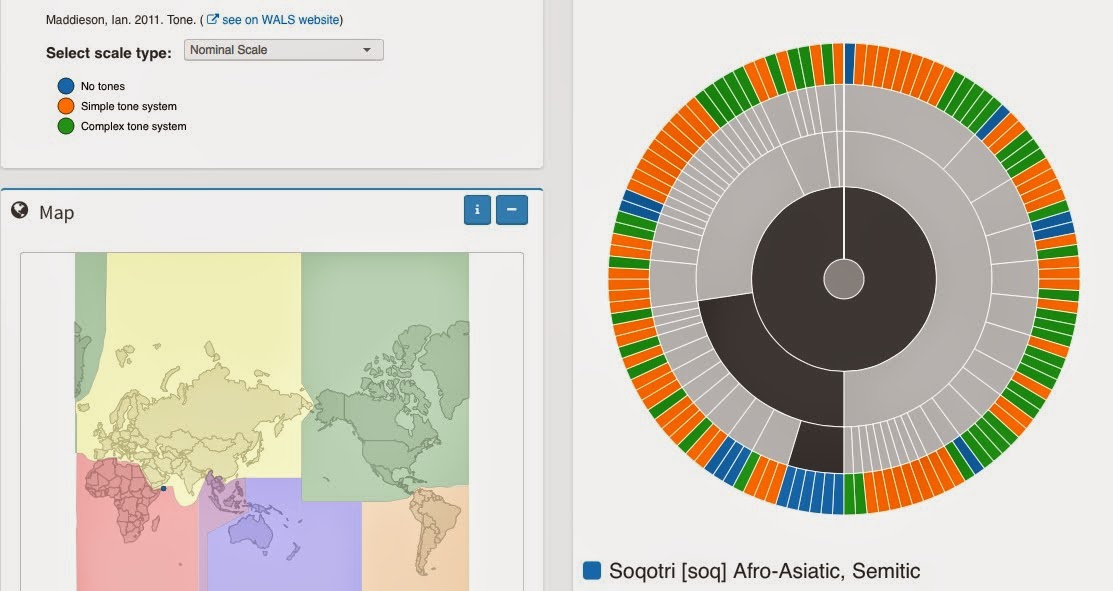 This new tool let's you investigate the WALS data and correlations between typological features and geographical areas and/or genealogical groupings in an easy way. It's very user-friendly, just go there and click around and you'll understand. You can manipulate the map and the "wheel" (the "sunburst") by clicking on segments.

It's based on the classical genealogical classification of WALS (i.e. not identical to Ethnologue or Glottolog, mind you) and more or less classical divisions of the world into countries and macro areas (Africa, South America, North America, Oceania, Eurasia and South East Asia). You can also define your own areas by selecting an area on the map.

The center of the wheel when you start is "all", the first level outside is macro areas, the second is top-level-family, the third is genus and the fourth and last is the languoid-level. Genus is a genealogical group of languages with a depth of 3500-4000 years, you can read more about the this and the WALS genealogy here. There are more genealogical levels than just top-level family, genus and languoid (what's languoid?), but since they're so varied in different groupings they've decided to only display three levels here. I've also noticed that the top-level-families get placed in one macroarea even if member languages occur outside, Afro-Asiatic is for example in Africa even if Hebrew is in Western Asia. Not that weird, but just handy to know as you play with the tool.

I've been playing around with it for a few seconds and learned that in Africa the genus with least tone are Berber and Semitic (not surprising, but I wanted something easy to check). Languages that have not been coded for having tone by Maddieson are the blue pie pieces up above.

So,  this is an exciting time to be a linguist on the internet:

I've learned from being on tumblr, and the internet in general, that there's usually a Beyonce-gif for every occasion, and I was not disappointed today. This is how I feel:

Back to seriousness, here's an excerpt from the release statement by the creators of WALS sunburst:

The WALS Sunburst Explorer shows the values for all WALS features by combining the geolocation of the respective languages with their genealogy in a sunburst visualization (Stasko and Zhang 2000). The map and the sunburst are enhanced with interactive functionality and linked views. The user can select a region of the world map to get only those languages spoken in that area displayed in the sunburst. The sunburst itself is zoomable. If you click on a segment, only the languages of the respective subfamily are displayed.

The main aim of the WALS Sunburst Explorer is to help its users to distinguish between cases of language contact and genealogical inheritance (Mayer et al. 2014; Rohrdantz et al. 2012). The combination of both types of information can be approached from two different angles. The first approach focuses on a given geographical distribution to explore whether the languages in that area all belong to the same family and thus lead to a clustering of the inherited feature at a certain region of the world or whether there is a real contact situation with unrelated or distantly related languages sharing the feature through borrowing. The second approach concentrates on a given language family to check whether the feature values are the same or similar for all members of the family or whether a divergent feature value can be attributed to the fact that the language is spoken in a different region and might have borrowed the divergent feature from a neighboring language. The WALS Explorer provides the necessary functionalities to tackle both approaches.

Alright, go play now and have a good monday!