Showing posts from August, 2016
Show all

Publish your research Open Access - for you, me and everyone!

By Hedvig Skirgård - August 20, 2016
Thinking of turning that MA thesis into an article, putting together an edited volume from a workshop or finally writing that big book on discourse particles that is going to solve everything? Why not consider Open Access (OA) publishing instead of the traditional publishing houses and journals? With OA, people have an easier time actually reading your work, and you won't be feeding money into a potentially shady system that exploits academics as editors and reviewers for free, and then makes the same community pay to read the products. Furthermore, by selecting OA options that have a good reputation, you're not in danger of the standing of your work lowered.

There are several traditional publishing venues who exploit the benevolence of the academic community by not paying reviewers and/or editors, not paying authors and then expecting university libraries to pay expensive rates when buying the published research - research that tax payers somewhere probably has already funded.…
Post a Comment
Read more

Some language universals are historical accidents 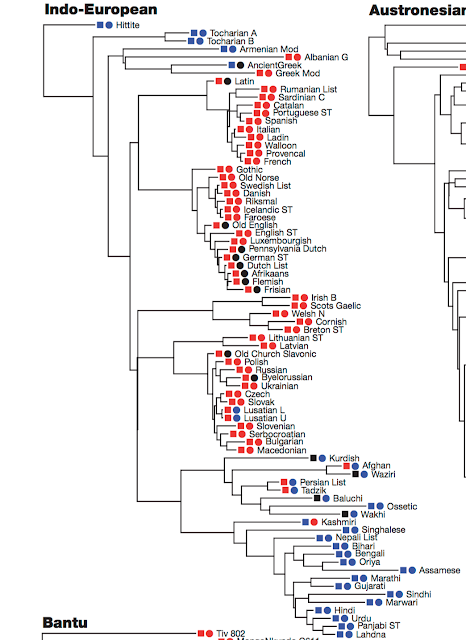 There are surprisingly few properties that all languages share.Pretty much every attempt at articulating a genuine language universal tends to have at least one exception, as documented in Evans and Levinson's article 'The Myth of Language Universals'.However, there are non-trivial properties that are found in if not literally all languages, enough of them and across multiple language families and independent areas of the world, that they demand an explanation.
An example is the fact that languages have predictable word orders.  Languages differ in whether they allow the verb to come before or after the object (English has it before, Japanese after).  They also differ in whether they have pre-positions (such as English ‘on the table’) or post-positions (such as Japanese テーブルの上に teburuno ue ni ‘’the table on’).  If a language has the verb before the object then it tends to have prepositions rather than postpositions, as in English; if the verb is after the object, it is a g…
1 comment
Read more
More posts